One element which makes music so powerful is its capacity to take us somewhere magical. Through his own compositions, RnB artist Donovan Lowe expresses his experiences of finding love, loneliness, and heartbreak, with the goal to become an icon for the people that feel unheard and unseen in life.

His musical background goes back to the earliest years of his life. Being a member of choirs and ensembles paved the way to him writing music in his teenage years. The struggles he went through at this time became the driving force for his lyrics, and arguably the catalyst for his success so far. He was an attendee of Musicians Institute, where he initially picked up his performance and production techniques. He later graduated from Los Medanos College with a degree in Music.

Donovan's debut EP, 'Loving U in Secret' captures that unique 'sadboi' vibe and echoes similarities to 6lack, Frank Ocean and The Weeknd. The project features the fan favorites, "Colors", "Feel the Same", "The Fall" and “Passion”. His latest single, “Tonight, It’s Going Down” is a collaboration that finds both artists in the Halloween spirit. 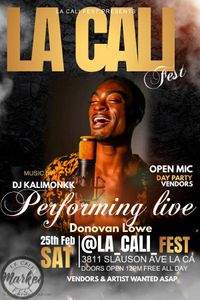 All ages. FREE all day.